At her wedding on October 12, 2018, Princess Eugenie purposefully showed off her scoliosis-surgery scars in a low-backed dress designed by Peter Pilotto and Christopher De Vos. Eugenie, who is now expecting her first child, had an eight-hour surgery for her scoliosis when she was 12.

On Friday, Eugenie posted to praise Selena Gomez for sharing her kidney transplant scar on Instagram. “I thought this was super cool of @selenagomez to show she’s confident of who she is and what she went through after finding it difficult to show her scar,” Eugenie wrote on her Instagram story.

On September 24, Gomez posted a photo of herself in a La’Mariette swimsuit in which she showed off her scar from her kidney transplant in 2017. She posted the following as a caption and addressed La’Mariette’s Theresa Marie Mingus.

“When I got my kidney transplant, I remember it being very difficult at first showing my scar,” she wrote. I didn’t want it to be in photos, so I wore things that would cover it up. Now, more than ever, I feel confident in who I am and what I went through…and I’m proud of that. T – Congratulations on what you’re doing for women, launching @lamariette whose message is just that…all bodies are beautiful.”
Eugenie spoke out about her surgery and how it changed her life—and can do the same for others.

“Children can look at me now and know that the operation works,” Eugenie wrote in a statement for the website for Royal National Orthopaedic Hospital, where she had the surgery. “I’m living proof of the ways in which the hospital can change people’s lives.” 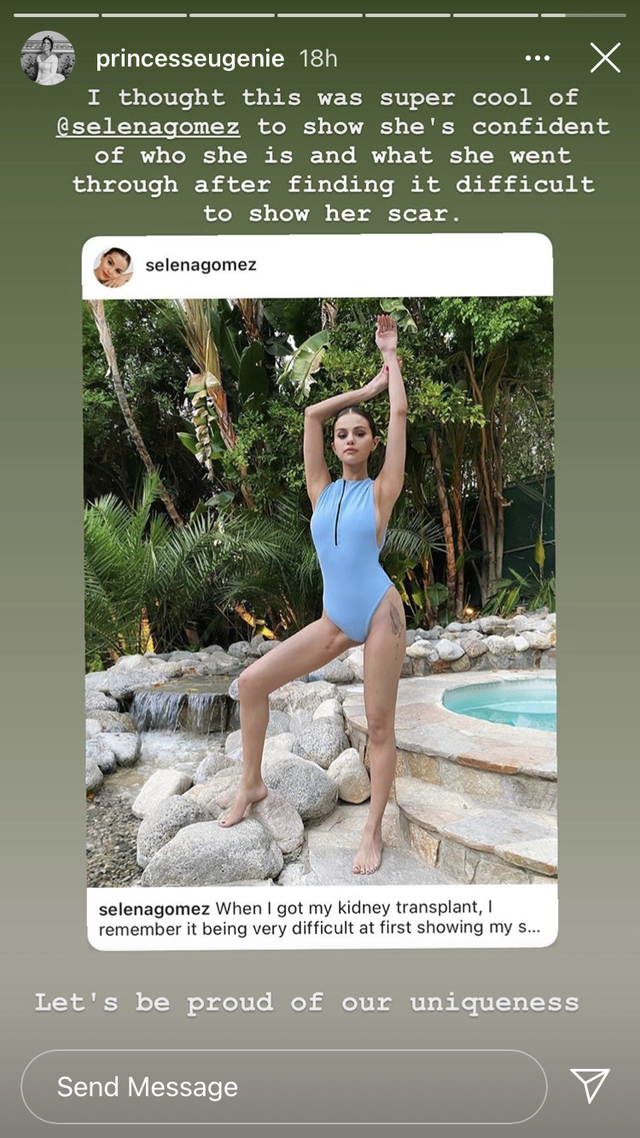 When I got my kidney transplant, I remember it being very difficult at first showing my scar. I didn’t want it to be in photos, so I wore things that would cover it up. Now, more than ever, I feel confident in who I am and what I went through…and I’m proud of that. T – Congratulations on what you’re doing for women, launching @lamariette whose message is just that…all bodies are beautiful.

At the Hispanic Heritage Awards 2020, which aired Tuesday night on PBS, Selena Gomez accepted a special arts award, and as part of her pre-taped appearance on the show, said she hoped to continue to inspire people by making them feel that “they can — no matter what.”

Gomez, 28, received the award presented by the Hispanic Heritage Foundation, not just for her acting and singing, but for her work executive-producing content that shines a light on the Hispanic community, not to mention her philanthropy.

“And I’m just really grateful that I have had so many beautiful opportunities, and to be a voice in the community means a lot. And it’s a big responsibility, and I love that,” she added. “And I promise more to come in future for all kinds of stuff. So thank you!”

The singer also spoke about being an advocate for mental health, including her work with charities that help people gain access to mental health resources.

“I actually think that a lot of the answers I got for mental health just made me stronger,” she revealed. “It gave me knowledge and I want nothing more than to help people who are experiencing the same thing.”

@HHFoundation is thrilled to recognize Selena Gomez with the Arts Award, presented by @SouthwestAir, for her impact on American and global culture through her music, movies but also for her courage as an advocate for mental health. #HHA33 #HispanicHeritageMonth2020 pic.twitter.com/jfPCXblZS2